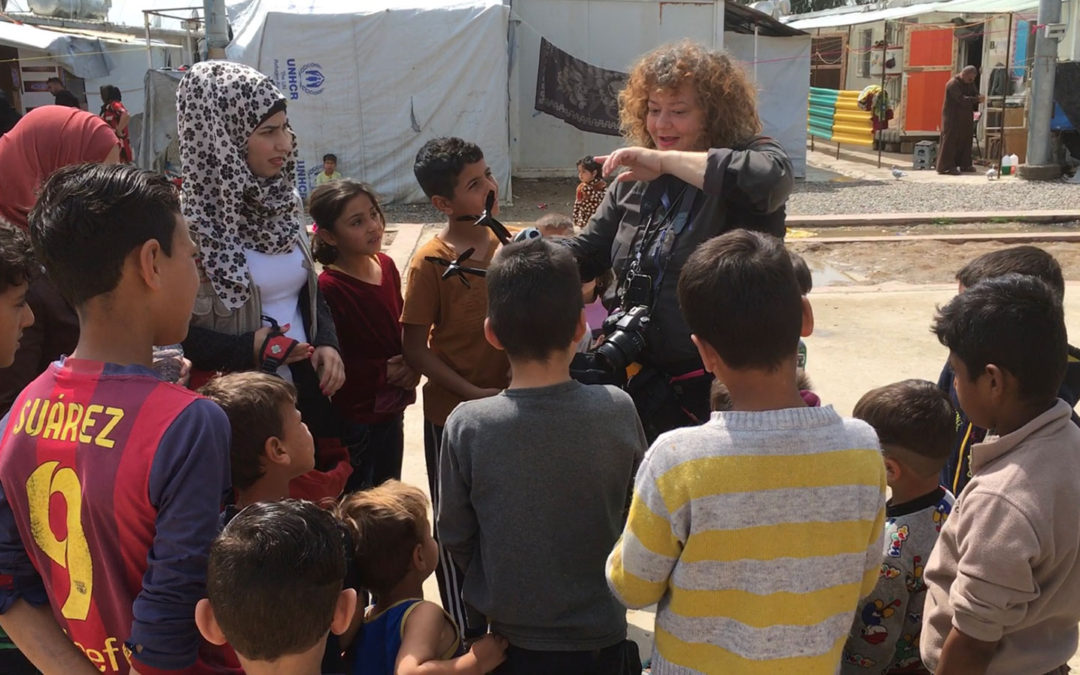 I have been a global photojournalist and documentary photographer for 25 years, I am originally from Mystic, Connecticut but I have lived in London for 20 years now. My work has taken me to over 71 countries in 25 years some of them are the most conflicted regions in the world including Syria, Iraq, Eastern Ukraine, Central Africa and Central America.

My photos have been published extensively around the world, and it is likely that anyone who reads this article has seen my photos or drone footage in a news-outlet story. Today, Drone footage is being used almost daily in news reporting. 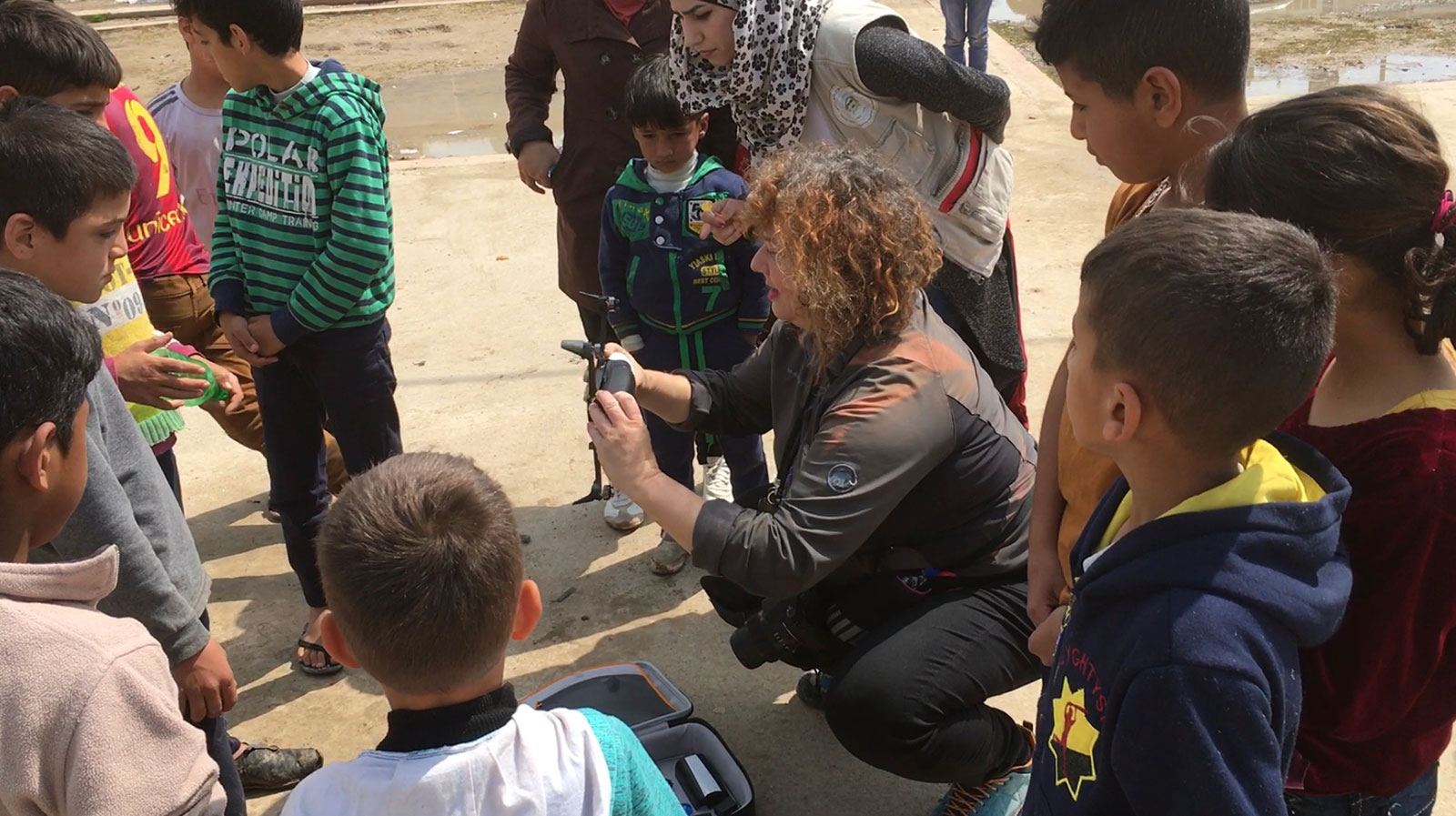 (Above Photo: Gail prepares to drone a refugee camp in Kurdistan where she teaches some of the refugees the positive impact a drone can have in helping during a crisis. Many children in conflict zones have had a negative experience with the use of drone technology in recent years in Iraq and Syria where i have been. Often when the refugees approach me it is with great trepidation especially the way ISIL used drones against the civilian population. I often let children and often their parents see and hold my drones before I survey the camps)

Droning was a natural extension of my work as a conflict photographer.  I have also had the wonderful opportunity of being able to study under one of the best UAV training instructors in Europe who really encouraged me to fly with great discipline, safety and precision. I studied at The Phoenix Flight School with Peter Milner.

In April/March of 2017 I decided to bring my Parrot Bebop 2 and my DJI Pro 3 to Iraq where I have been living on and off for the last 3 years. This would be the first time I would drone in a war zone. When I droned over Mosul in March 2017, I saw that there were a few male news teams droning there but I had not seen any women droning anywhere in the two months I was droning the refugee camps in and around Mosul. I did see many female photographers but none were using drones. 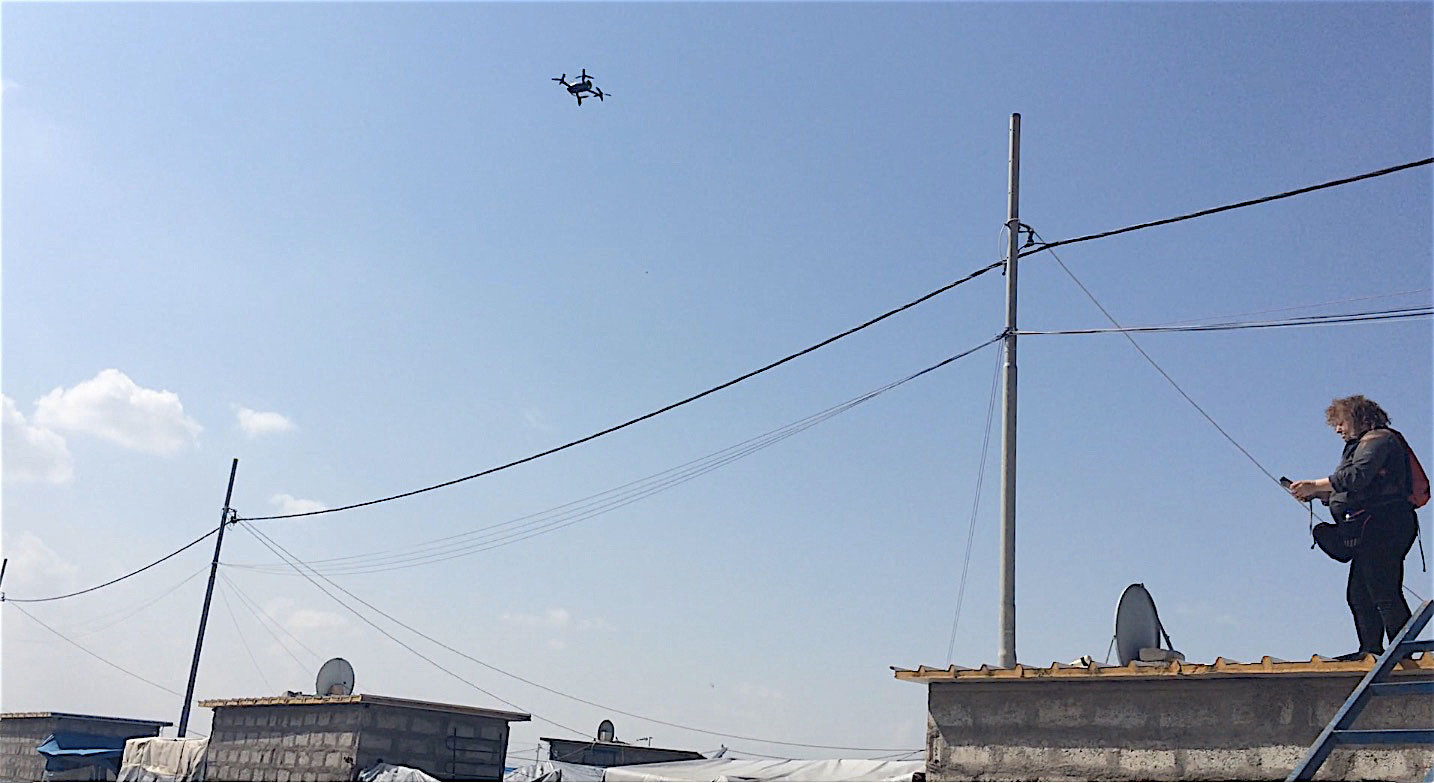 (Above Photo: Gail Surveys Baharka refugee camp in Kurdistan, Iraq. Her upcoming book “Droning Through Wires” discusses the challenges she faces droning conflict zones. The difficult part is always those unexpected downed lines/wires you get in all conflict zones. Drone journalism was such a natural extension for my work. I always used monopods with extenders as a photojournalist I feel liberated and a bit spoiled now having the opportunity to use both in the field. It is truly a profound change in the way we gather news)

Once I started to include droning in my work in Iraq I was amazed that I was able to capture vastly more of the story than with traditional technology I had been using throughout my photo career.  I could get a bigger picture and a better over-all understanding of the environment.  This was a profound revolution in my ability to bring more of the story to the world and to see what was going on very much past my immediate periphery. I could see a whole world beyond the background; it was truly amazing for me to experience this.

Once I started editing my footage of the refugees, the camps and the military I was embedded with I literally felt overwhelmed. There were frames I viewed that I had no idea would have existed without seeing them via an aerial vantage point and the aerial stills I grabbed from the footage were breath-taking. 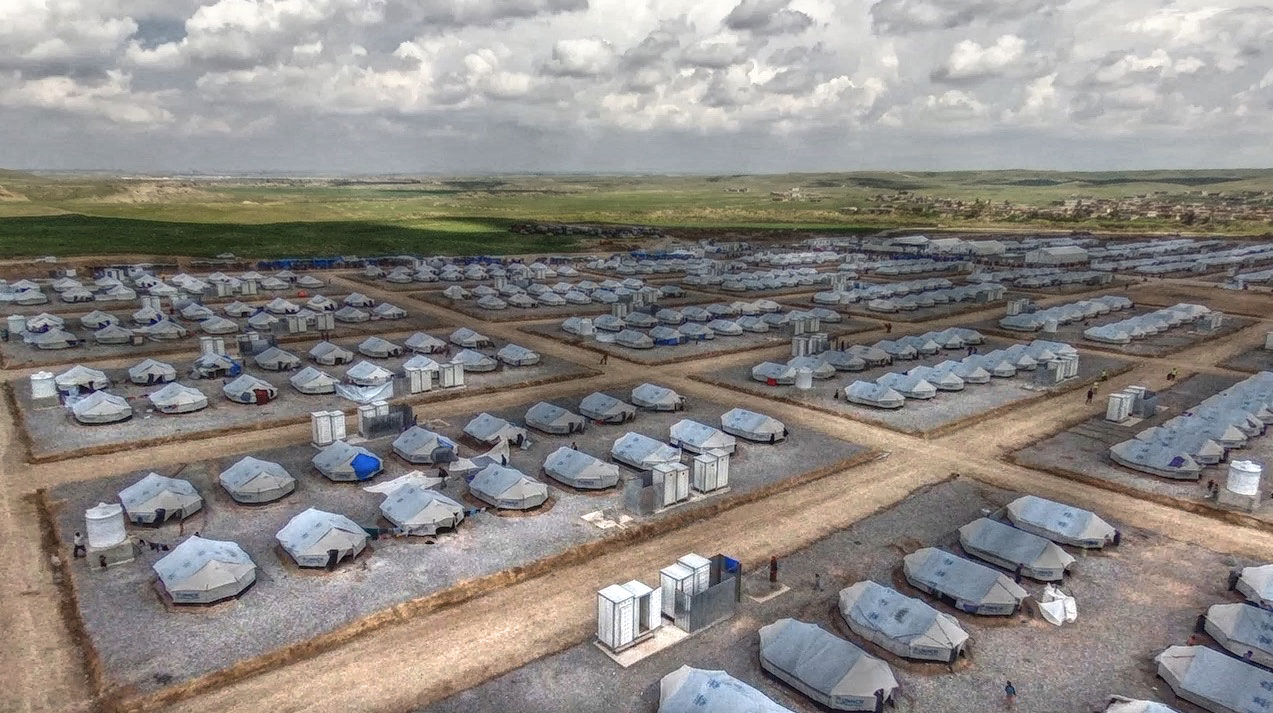 (Above Photo: One of many Surveys Gail did at the Chamkor Camp, 20 Kilometres East of  Mosul, Iraq)

It was then I realized the potential of having such an extended view of a conflict area was so critical not only to the story but also for my safety. Often I could not get close to a particular story because of the dangers of IED’s and snipers; my drone I realized could gather so much information about the terrain, although of course you are still facing a lot of danger on the ground. But the more work I did the more potential I started seeing drones could have in these environments, especially saving lives, doing food drops and working with NGO’s to survey refugee camps. I feel now the opportunities are limitless and go far beyond news gathering. 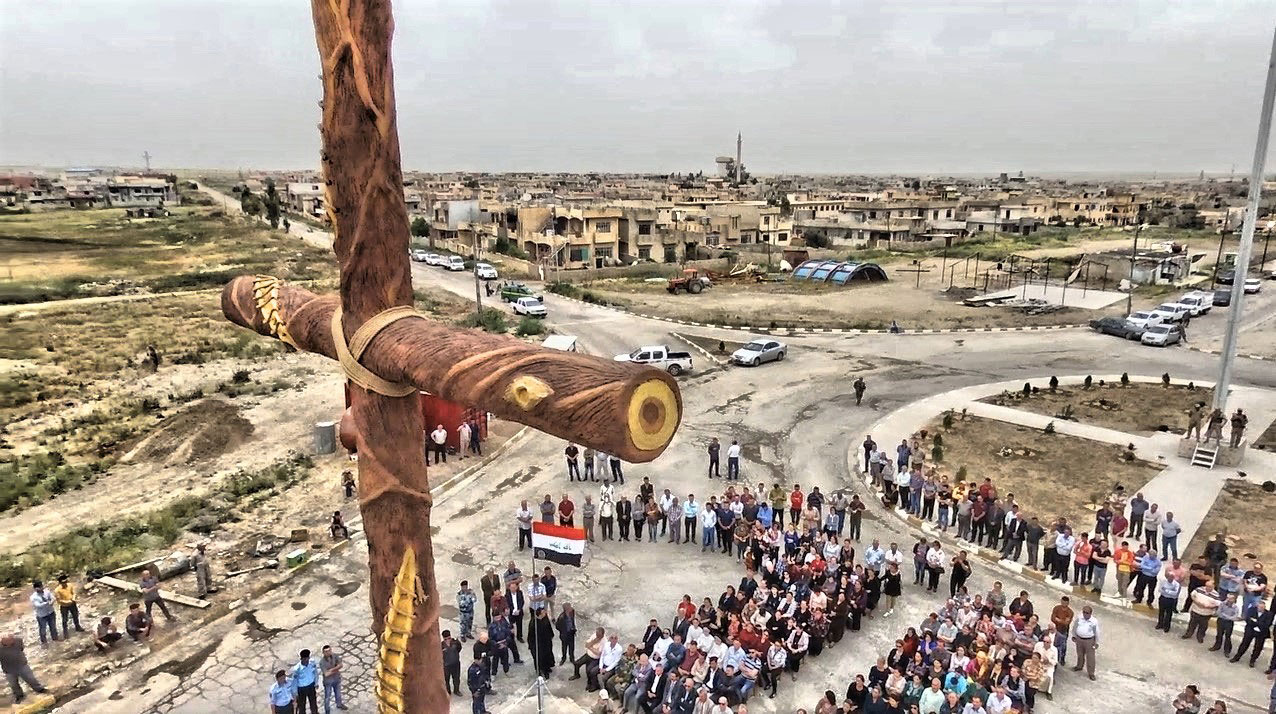 (Above Photo: Iraqi Christians of the Nineveh plain around Mosul, celebrate the liberation of Islamic State erected a symbolic 100 foot cross in the city centre. Hundreds attended the ceremony as they were also allowed to move back to their homes that day)

I recently got back from droning the Rohingya fleeing Myanmar into Bangladesh. The situation among the Rohingya in Bangladesh was often too difficult to cover with conventional news gathering methods because of a combination of the Monsoons and flooding and the violence and chaos of the masses of 100,000s refugees moving quickly into small areas. In this case I had used my drones to cover the extent of this tragedy more safely.  I feel that drones open more possibilities to the photojournalist than any previous technology.  Droning will create a revolution in how we gather data and learn about the world, especially I feel in observing patterns of migration, saving lives and delivering Aid to difficult places. 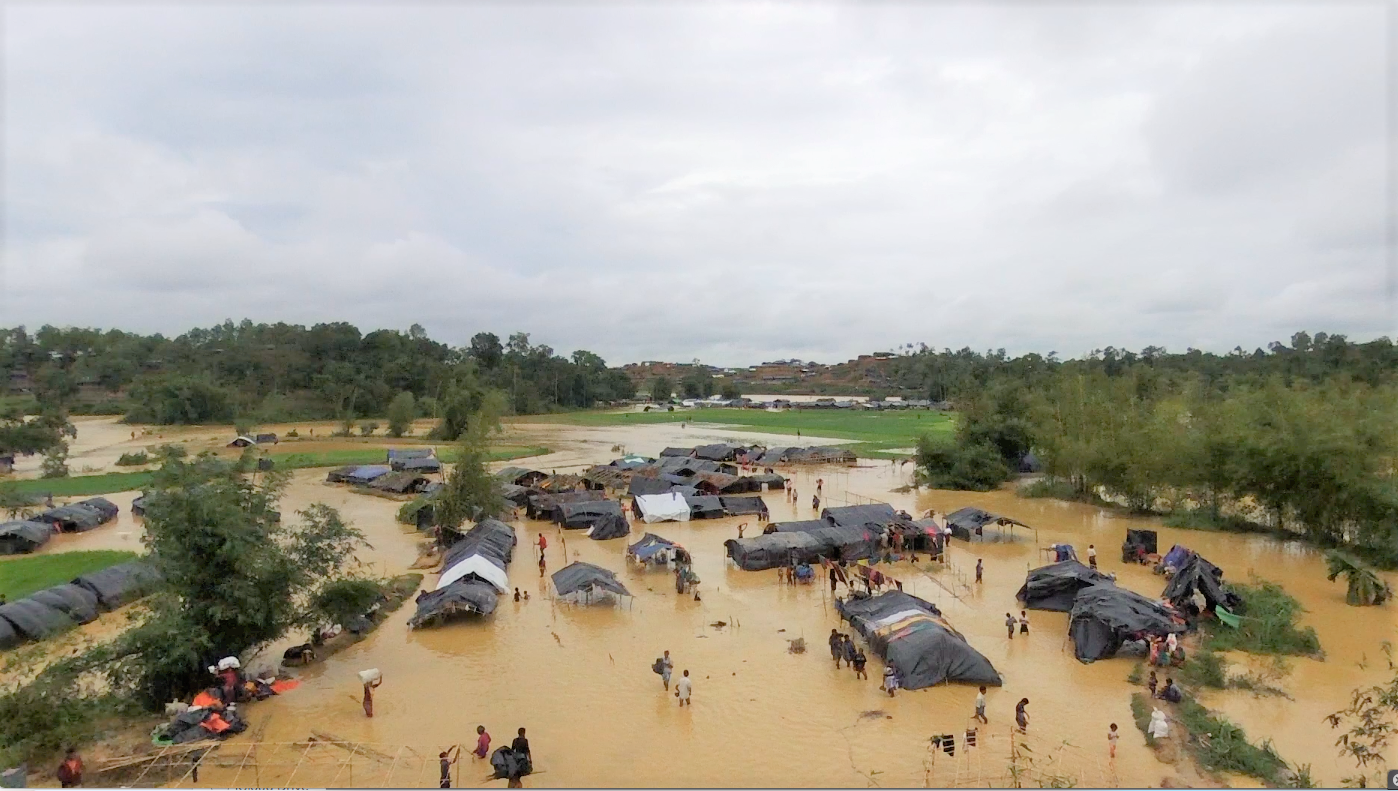 (Above Photo: An Aerial view of flooded areas all over Bangladesh, Coxs Bazar where thousands of Rohingya are fleeing into Myanmar. Gail Droned during the Monsoon in Bangladesh using smaller drones. To get this footage of the floods she chose not to use her traditional photo gear. “Using my drones over the flooded areas was so is critical to identify where people were stranded and really really far away and in desperate need for assistance. Drones are the future of AID relief in these harsh environments)

A very critical thing to think about while droning in conflict zones is that you need to be up to date on how that country allows you as a pilot to work, not all of these places have drone laws in place, but they will expect you to register or at least inform them of your equipment and what your plans are. I was stopped quite a lot when I first began droning in Iraq, and I was very glad I had all of my paper work in place. Remember that many of the drones you are taking in like the DJI 4 are drones the military may be using as well and also the “enemy” may be using them in a very horrific way. So that is why you have to work with the government especially in these hostile environments. Keep in-touch with the security forces on the ground as much as you can. I often stop by the police stations and also show my drones to the military person manning the check-points. Two things I liked using the Parrot over the DJI Professional on the frontline are that: Firstly, the Parrot is quieter and smaller, it does not attract as much attention but the camera is much more limited.  Often, when I was filming with the DJI Pro, subjects on the ground stop and stare which you don’t want as a journalist.  Second, the DJI Pro is more likely to “draw the attention” of local law enforcement. On several occasions I have had my DJI impounded and damaged, were as the Parrot is pretty much ignored by officials. 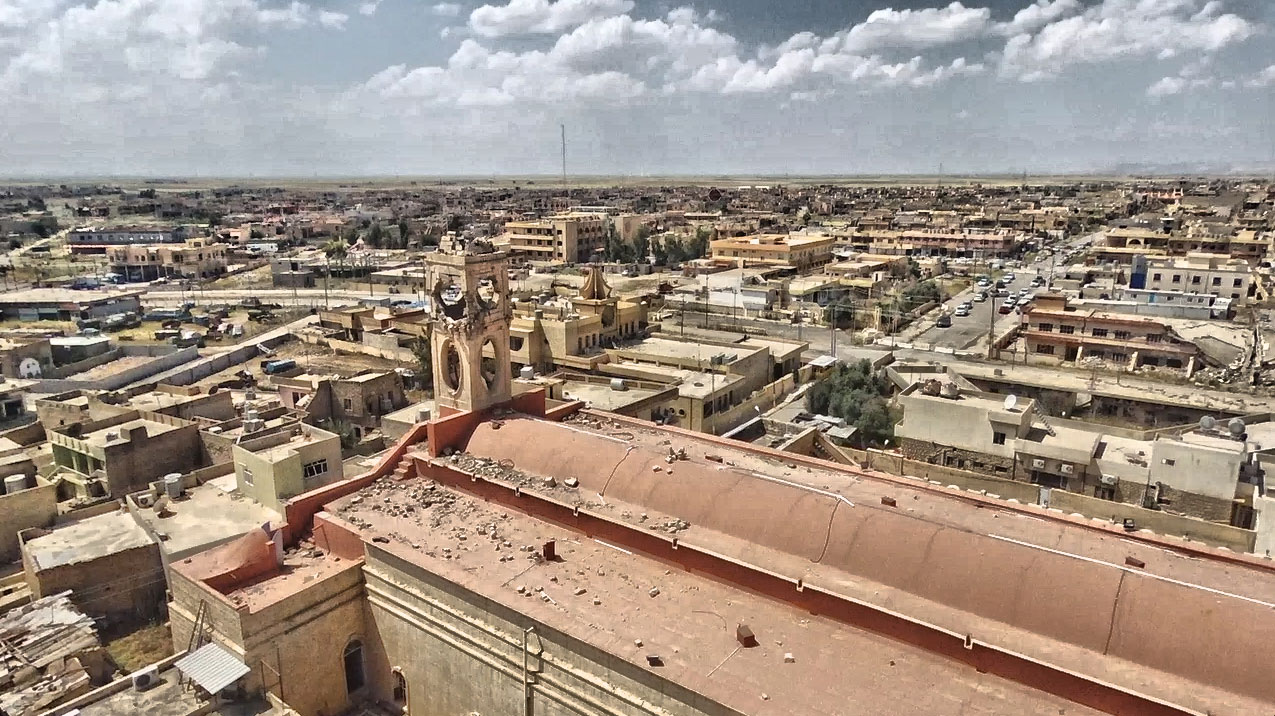 (Above Photo: Gail flew over Nineveh extensively when it was liberated from ISIL. The nave of the Church of the Immaculate Conception had extensive damage from ISIL as did all nine churches ISIL destroyed in the Nineveh plain in Iraq. Flying over the churches was pretty heart-breaking. This was the first time I had droned the destruction of so many religious sanctuaries in one area)

There is always many difficult technical challenges in conflict zones like wires and cables everywhere. Many wires are often downed phone lines and electrical lines that are often in my flight path. So really, I often use my binoculars first to scope out areas because of course safety is first anywhere you are in the world.

Twitter @DroneOrenstein
email: gailphoto@hotmail.co.uk
All my drone footage can be seen on Getty images

I am looking forward to new generation of drones like DJI Maverick Pro Platinum.  For field photojournalism the ideal drone would be small and most critically less noisy than more traditional drones and fold up. I am pushing the technology, looking for drones that combine the small size and relative quietness of a small drone with the image quality and camera control of the larger more professional drones.

I am excited about drone technology and the impact we are already seeing within the news gathering industry by seeing a larger picture of the story happening on the ground. More important is that I hope the industry respects and fosters the contribution of women and minorities more on an equal basis. When I recently came back from droning the plight of the Rohingya population from Myanmar I still did not see any female drone pilots, I do hope the news industry begins to train a lot of female pilots.

It is really so important that women become involved in this technology early on, unfortunately that has not always been the case when new technologies comes out.  One main reason women should especially embrace droning is because so many of the victims of global warming, ethnic conflicts and warfare are women and children. So we want an inclusive technology that is open to the views and problems that women face during these life threatening situations. It would be wonderful to be part of a training program for local women to learn to drone in hostile environments so they can partner with NGO’s on the ground and help be part of the solutions.

(Below Photo): Close-up of the Balukhali customs field in Bangladesh where thousands queued for food were struggling so much, including me. This shot at the food delivery truck was taken with my Nikon DSLR. The point is that when I was shooting and it was110 degrees Fahrenheit, raining and the food distributors themselves were struggling to cope I had to get off the truck. I had  to change the technology i was using. I had no long lenses on me at the time and i needed simply to get out of the way. I cognitively switched and thought you have to drone this, you have to show a completely different angle of the whole environment. of the food crisis here.) 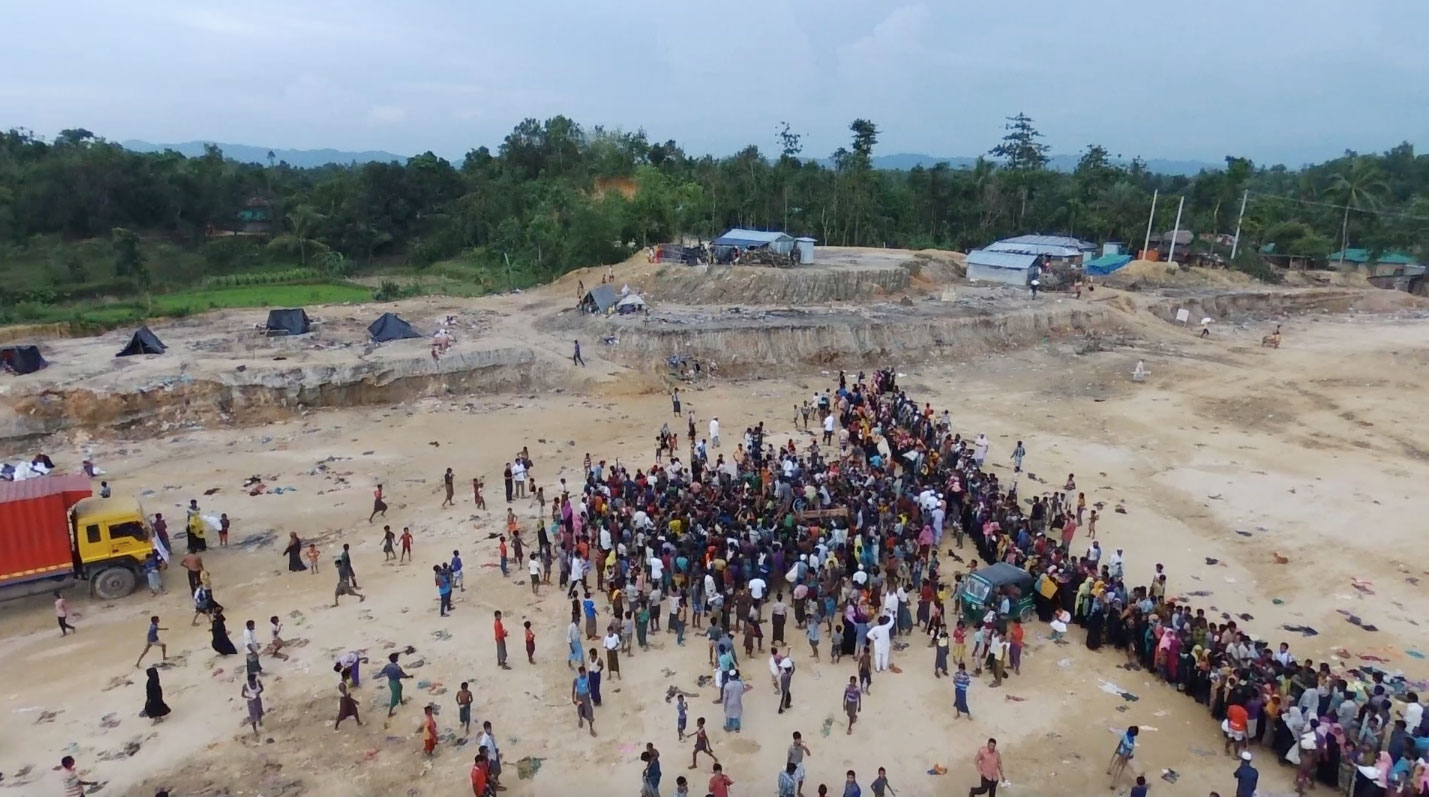 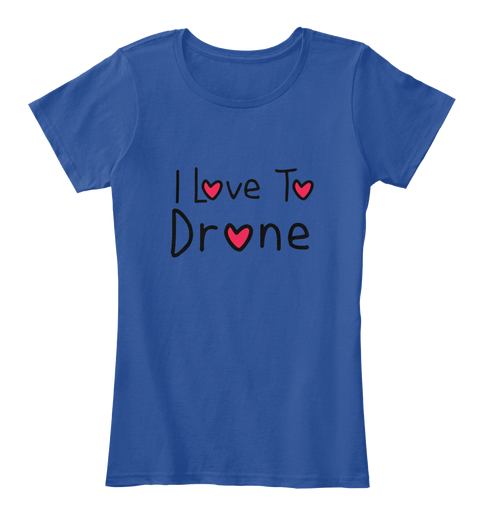 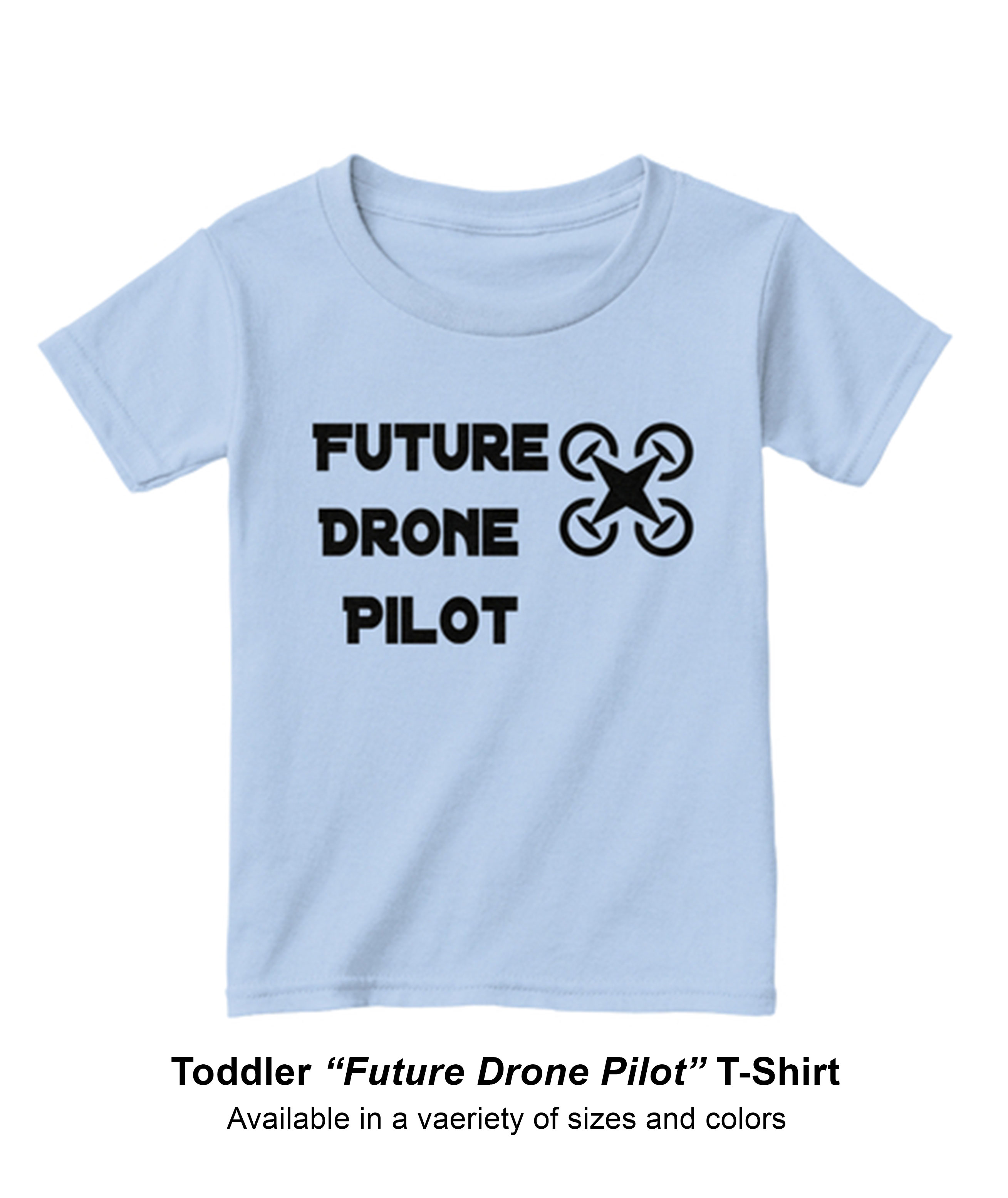 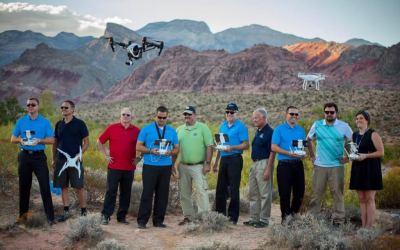 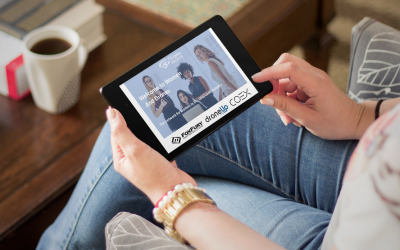 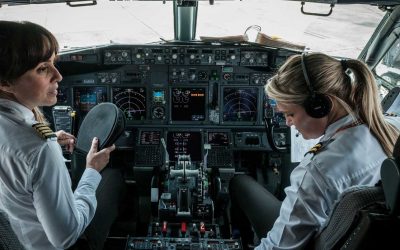