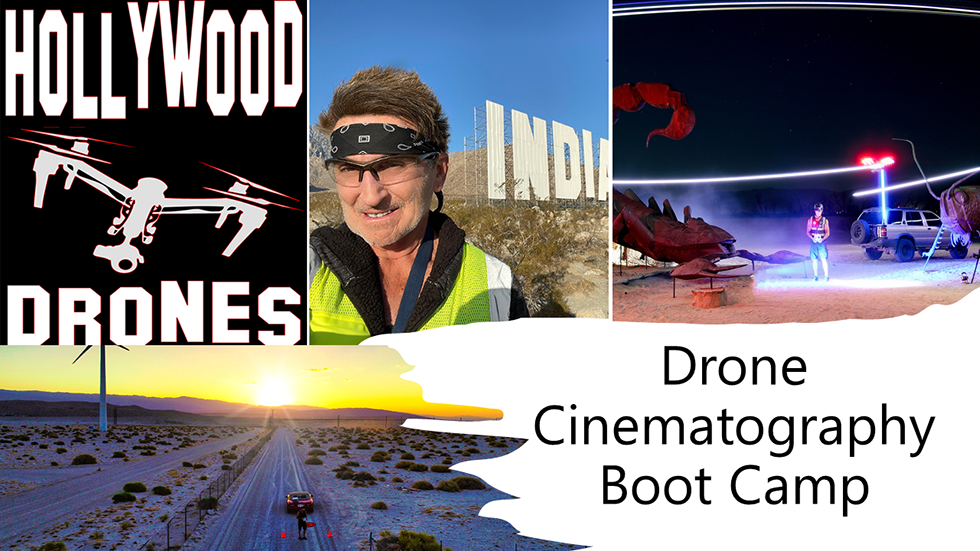 Chicago, IL August 15, 2022 — Women and Drones has teamed up with Hollywood Drones to offer a Drone Cinematography Boot Camp.

Hollywood Drones is a leader in drone cinematography training. The two-day workshop will provide an exciting opportunity in a uniquely visual environment to learn photography and filming skills for day and night movie shots. The boot camp will also include a demo of the Sony Airpeak drone.

The training event is scheduled for November 4 – 5 in Palm Springs, California. It will include hands-on flying at various scenic and popular sites in the Palm Springs area. The classroom portion of the workshop will be conducted at the Mineral Springs Resort and Spa.

Two-time Emmy nominated Drone Cinematographer Skip Fredricks will lead the training session. “I love teaching as much as filming.  I’ve taught almost 600 students in the last four years and 40 percent of my students are female,” said Fredericks.  “Working with a small group while focusing on drone filming skills, surrounded by great scenery is going to be awesome.”

Fredricks was one of the early adopters to utilize drones in the cinematography arena. He’s had a successful and rewarding career in broadcast television, film and new media, having produced award-winning content for NBC, FOX Sports, HBO, Universal Pictures, Google, and Apple. Currently, with over 800 hours of flight time, he is an Aerial Producer at Hollywood Drones, Professor of Drone Aeronautical Studies at Grossmont College in San Diego, and Drone Flight Instructor at LATTC.

“We’re excited to partner with Hollywood Drones to offer this realistic training opportunity to our network,” said Sharon Rossmark, CEO of Women and Drones. Sharon added “this workshop is a part of our endemic strategic plan to connect the drone community with expanded in-person educational opportunities.”

The training event is open to commercial and recreational drone pilots and member and nonmembers. Participants in the upcoming November training event are required to bring a drone capable of taking video and still photos. Plus, the drone must have lights for the night flight portion of the boot camp. For more information and to apply visit: Drone Cinematography Book Camp.

About Women and Drones:

Women And Drones is the leading membership organization dedicated to driving excellence in the uncrewed aircraft systems (UAS) and Advanced Air Mobility (AAM) industry by advocating for female participation in this dynamic segment of the global economy. We partner with companies committed to an inclusive culture where women can thrive. Our educational programs range from kindergarten to career in efforts to balance the gender equation in the industry now, as well as for the future of flight.