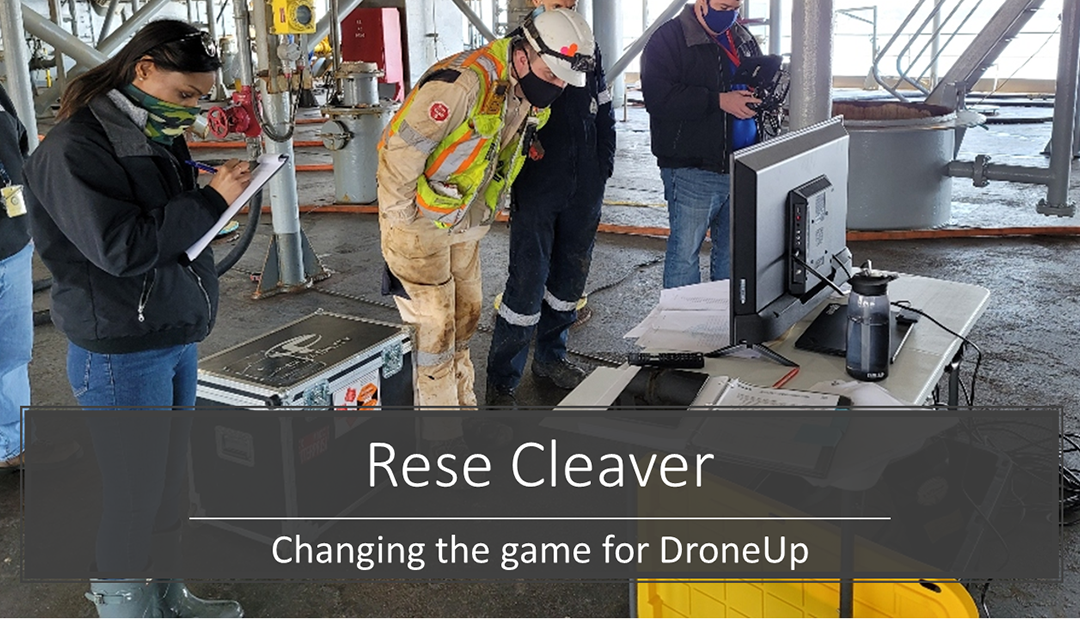 The mission was such a success that DroneUp has started taking on more maritime inspections, building out a business line focused primarily on doing inspections by drone inside large ships.

These inspections are mandated by law, and have to be performed periodically according to certain standards to ensure that cargo and ballast tanks within large ships remain in good working order.

The potential in this sector is huge. Inspectors conduct dozens if not hundreds of these inspections annually, but many of them are done without the use of any robotics, creating lots of opportunities for the use of drones to improve current processes.

The maritime inspection Rese Cleaver’s team conducted by drone was of a cargo tank on a huge warship. The inspection had to be performed following American Bureau of Shipping (ABS) standards for cargo tank inspections, which meant that DroneUp had to obtain an ABS certification to do it.

A picture of the cargo tank

Following a traditional method, the cargo tank inspection Cleaver’s team performed would have had to:

Cleaver thought she could do the same inspection in just 50 hours with Flyability’s Elios 2, an indoor drone surrounded by a protective cage.

Using the drone, she believed her team could fly into the empty tank and collect video footage of all of it without having to send a single person inside, thus collecting visual data remotely instead of endangering people to collect it in person. 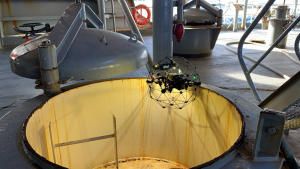 The Elios 2 entering the cargo tank

Cleaver learned that the government agency that manages warships had issued a Request for Proposal (RFP) for a cargo tank warship. She submitted a proposal and DroneUp won the bid.

The inspection was a big success—so much so that DroneUp is now in the process of taking on several more maritime inspections, effectively opening up a new line of business doing them.

In her proposal, Cleaver highlighted speed, safety, and savings as key benefits DroneUp could provide by using drone technology for the inspection.

The Elios 2 inside the cargo tank

And her claims were confirmed by the inspection. Using a drone for the cargo tank inspection instead of a traditional approach, DroneUp was able to secure these big benefits for its client:

*It’s important to note that saving time for these kinds of inspections doesn’t just represent cost savings in terms of reducing the number of billable hours needed for the inspection, but also in terms of reducing the amount of time the ship is down. In some industries, every hour of downtime—that is, the time an asset is down for inspections and maintenance—can cost thousands or even tens of thousands of dollars. 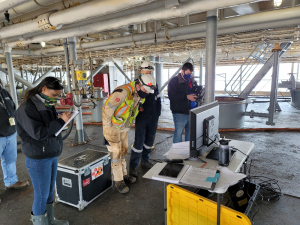 Cleaver’s team monitors the live feed from the Elios 2

Looking for Gaps in the Market

Rese Cleaver has built a career out of identifying market needs and then helping companies develop new sectors of their business to meet those needs.

With a background in health sciences administration and project management, she is the kind of person who can take a complex subject—like, say, maritime inspections—and study it until she knows it inside and out.

Cleaver started her career in surgical technology, where she cut her teeth doing work in IT implementation for healthcare organizations.

That work led to an opportunity to oversee a project conducted by NASA and the Department of Defense (DoD) to adapt the video game Call of Duty so it could be used to train combat medics.

From there, Cleaver went on to develop a Fire Safety Training videogame, following a similar concept.

These two video game projects were requested by huge government clients—but the next one she worked on was her idea. Doing research in the training market, Cleaver discovered a big need for training materials to support work in shipyards.

She proposed the development of a new video game that would provide training in shipyard safety. When the game launched, it quickly became one of the most consistent revenue drivers at the company.

From there, Cleaver moved on to work at a SaaS (Software as a Service) company that made software for government accounting and procurement. Again, she was able to identify market gaps that could help the company create new business lines, and within the first year there she helped triple the company’s revenue.

At this point, Cleaver had made herself a generalist—someone who could walk into an industry and learn enough about it in a short period of time to start identifying opportunities for growth.

When Cleaver’s former supervisor from a past job invited her to join the DroneUp team in early 2020, she jumped at the chance. She had never worked in the drone industry before, but she was excited by the prospect of learning about an entirely new area of technology, especially one with as much potential for changing the world as drones present. 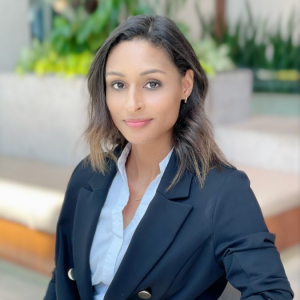 Cleaver joined DroneUp in early 2020. When she first came on, the two primary business sectors for DroneUp were drone delivery and work in real estate marketing.

She dove in head first, immersing herself in the language of real estate and in the regulatory and technological complexities of drone delivery. Before long, DroneUp’s marketing team launched a podcast on Real Estate Investment Trust with Rese front and center, hosting REITs with Rese. (The podcast can be found here).

By late 2020, she was helping lead DroneUp’s efforts to meet the challenge of NATO’s Autonomous Last Mile Resupply experiment, a key part of the company’s drone delivery efforts.

The goal of the experiment was to deliver specific payloads—like ammunition or medical supplies—to specific recipients in a specific location in the field, which no one had ever done before. Working with several partners, DroneUp was able to use its proprietary drone delivery solution Combat Drone Services to complete a delivery that met the experiment’s requirements.

While Cleaver was busy helping conduct these experiments, DroneUp was also launching a pilot program  in partnership with Walmart to deliver COVID-19 test kits to people’s homes. Both efforts were successful, and the company has only continued to grow its drone delivery sector work since then.

After completing the NATO project, Cleaver learned about an opportunity to submit a bid for a warship inspection in early 2021.

Once again, she dove right in, immersing herself in the minutia of maritime inspections because it seemed like it could be a promising new business line. Fast forward to today, and DroneUp has completed its first ABS cargo tank inspection and is planning to do many more cargo tank inspections, providing both digital twins and video footage to its clients.