Wonder in Their Eyes: Drones for Education and Environmental Science 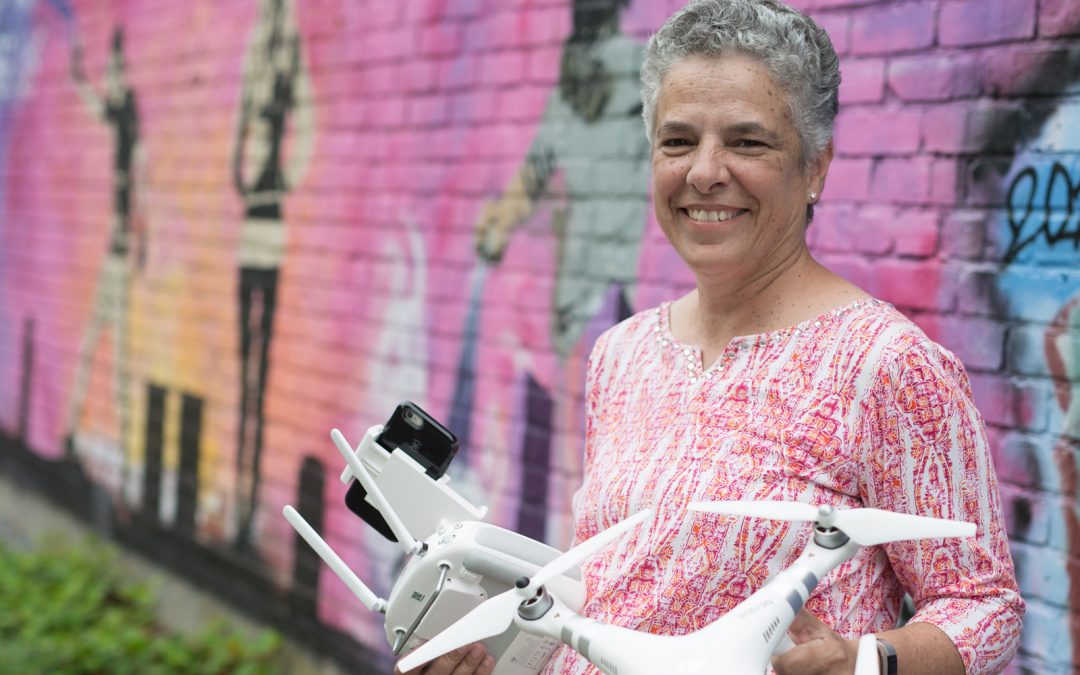 I am an avid life-long learner and live in Rochester, New Hampshire (USA). Along with working as a Stewardship Coordinator/GIS Specialist at the Wells National Estuarine Research Reserve in Wells Maine, I also love to teach.

I have a Master of Science degree in Environmental Science: Resource Conservation from Antioch University New England and am currently a student in Penn State’s Graduate Certificate Program: Remote Sensing and Earth Observation. I have taught in the Geographic Information System world for several years and am teaching my first drone course this summer. It is an online course for Unity College in Maine entitled Drone Technology and the Environment, an eight week course that gets students flying recreationally, starts them studying for the remote pilot exam, has them investigating drone use in the environmental field and has them creating a portfolio of practices and procedures.

My main career is working as the Stewardship Coordinator at the Wells National Estuarine Research Reserve  The Wells Reserve is one of 29 Reserves located around the country and in Puerto Rico. I am working to bring drone technology into the Reserve System and have worked on several multi-reserve projects including creating a Reserve UAS roadmap: The Way Forward: Unmanned Aircraft Systems for the National Estuarine Research Reserve System.

Concurrent to working for the Wells Reserve, I spent 21 years in the Air National Guard as a Combat Weather Forecaster which was mostly aviation support missions. I spent a year in the desert learning about forecasting sandstorms that showcased how the availability of timely accurate aerial imagery was quite literally a life or death asset.

My first drone was a Parrot AR2.0 that I saw being flown inside of a Brookstone Store. I was thunderstruck about the possible applications for this in the environmental field and just had to have one. On my first flight, the drone became airborne and immediately made a bee line for my husband’s head. He did a tuck and roll and quickly learned to stand behind me from then on. I quickly learned how much I didn’t know about flying a drone. I fell down the rabbit hole and have been knee-deep in the UAS world since then.

In 2012, I attended a program called Entrepreneur Bootcamp for Veterans (EBV) and met another drone enthusiast in the program. Her name is Allegra Rosler and her military specialty was airport administration, including military drone support. Within a month, we formed New England UAV, LLC and began consulting with educational institutions and other entities about the use of UAS in research and education programs. We continued to get educated ourselves and in 2016 I got my remote pilot license in the first big rush.

Afterwards, I found my favorite UAS mission of all- getting kids involved with drones. They are a match made in heaven. It thrills me to see the wonder in their eyes when you put a remote control in their hands. Church youth groups, boy scouts, home school kids, career days in middle schools, where there is kids there is fun and learning going on.

I grew up in the 60’s and my dad always called me his “woman’s libber”. I always was a boundary pusher. I joined a combat weather team, spent a summer working at the South Pole, got my motorcycle license at age 50, and now am a Remote Pilot. I think the boundaries that I am meant to push have always been my own personal ones. I am very interested in working with promoting women in the drone industry and particularly interested in working with girls in STEM programs. We may not be everywhere but we are here! One of my favorite quotes is from Eleanor Roosevelt: “A woman is like a teabag, you can’t tell how strong she is until you put her in hot water.” Turn up the heat baby, we can take it! As far as which drones I like to fly, my current favorite is the DJI Mavic Pro, although I love testing out training drones. My favorite in that category is the Holystone HS190 a tiny little thing with amazing capabilities. The drone folds up and fits inside the controller!

Last Thing: I am participating on a panel discussion for a webinar hosted by Directions Magazine and the GeoTech Center called Drones Flying Free 2018 on May 16 at 11:00 am EDT. My topic is Fostering Interest for Women and Girls in the UAS Industry.